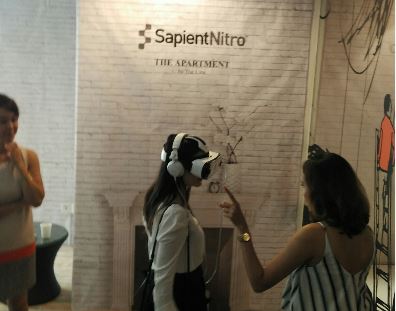 As part of the #Whatsticks series, SapientNitro organized a Breakfast Talk event last week (free breakfast!) and the topic of the day were VR and AI: What you need to know to make it a reality as these are trending and as mentioned by one of the speakers:

“if you don’t buy into it right now, you are going to miss the train.”

Why and How to use VR for marketing and advertising

Melanie Cook, Head of Strategy (Southeast Asia), was the first speaker of the day and she shared her experience at the South by Southwest conference event that happened earlier this year. VR was a headline showcase at the event, and people were completely blown away by the experience that it presented.

The uncomfortable truth that Melanie mentioned about the marketing industry is that marketing is bounded by the current and past boundaries. People are not believing that VR is at the tipping point where it will suddenly become the new technology that will sweep the world like smartphones did a few years ago. To all marketing people, engagement is the cinderella of marketing but most marketing strategy try to engage as many people as possible to convert a few, whereas high technology marketing does it the other way around (to engage a few niche which will funnel down to convert the masses).

To highlight her viewpoint, Melanie uses various examples of how many of the world’s well known brand names are trying out VR to better engage with their customers. These examples like New York Times and the MINI. These experiences enable the users to understand the content better for example, the life in a war zone through the immersion that VR put its user in. The VR films by MINI was not a traditional car advertisement but through the entire sequence in the film which was set in a car, it go the user to look in the car and test-drive it. VR creates emotion and emotion will make the user act on it to do something.

Recommending a 4 step process that brands and marketers should adopt based on various leading experts:

Melanie ended her wonderful presentation by reinterating that VR “has to be part of your story if not your rivals will.” Do check out her slides at this link.

The next speaker was Sean Burke-Gaffney, the Director of Technology in Southeast Asia. He shared a great deal about technology about VR to give the people at the talk who like most people not very well verse about VR more information about this “new” technology.

Like readers of this blog will know, VR has started since a long time ago and Sean rightfully explained that to the audience with the Sensorama in 1962, military in vr for a long time, NASA has used it since 1970s.

So what has changed over the years? Sean says that VR is table stakes for marketers now because cost of entry has gone down dramatically. Processing power, authoring tools, revolution in playback have advanced to the point where it is becoming accessible to the main consumer.

He showed the audience many examples of VR being used. Like mixed reality videos, screaming at a whale when it swam beside you (the Blu in HTC Vive), how Mariott hotel created a “teleporter” to teleport newly wedded couples to their dream honeymoon location through VR. These experiences shows the promise of VR in creating new experiences never seen before and they are able to affect consumer decision.

On the horizon are even more newer technology that will take off after VR like mixed reality in Hololens and Magic Leap and he ended off by reminding us that technology is coming to us and we should make use of it. Do check out his slides at this link.

All in all, this event was great in that like the purpose of this blog, it promotes awareness of VR to marketers and it is important that these people are able to understand the impact of VR as they will be very crucial in how VR can be implemented by the advertising and media industry and this will in turn affect how the general consumer sees VR. Marketing projects will definitely play a significant part in funding VR development and help the industry grow.