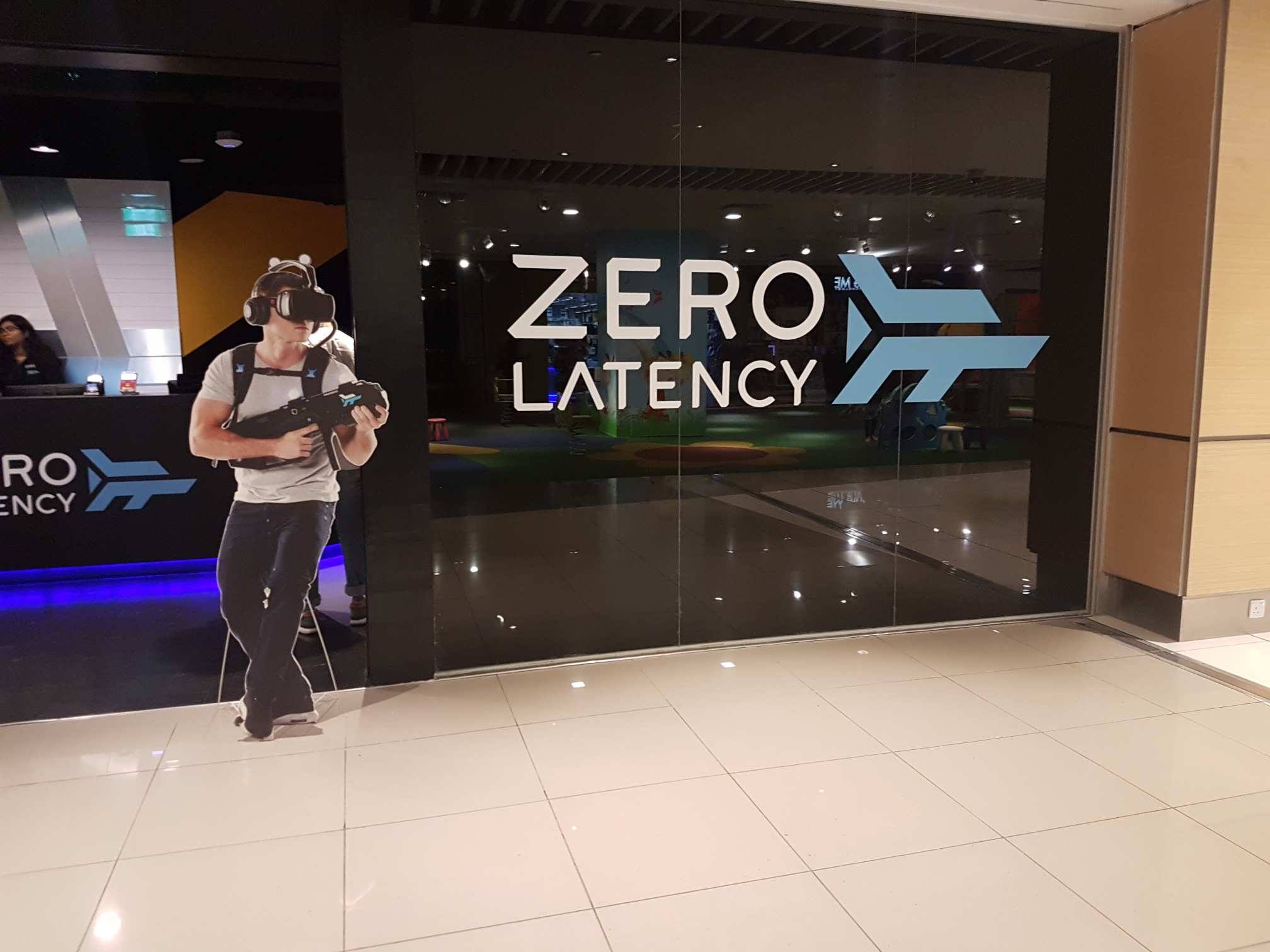 Virtual Reality LBE (Location-Based Entertainment) in Singapore just had another new addition. Right after the opening of Virtual Room which we tried out last month, Zero Latency has arrived at the shores of Singapore and opened to great fanfare.

Just about a year ago, we spoke to Zero Latency’s CTO, Scott Vandonkelaar at Unite 2016 about the possibilities of opening in Singapore and he said maybe. Lo and behold, Singapore is now the 14th outlet of Zero Latency in the world and the only one in South East Asia.

We gathered a squad of VR developer, enthusiast, reviewer, arcade owner to try out and see what the hype of this Australia-originated VR experience is about! Read on to find out more!

Zero Latency Singapore is located at Suntec City, near the cinema area, which is easily accessible from Promenade MRT from the downtown line. 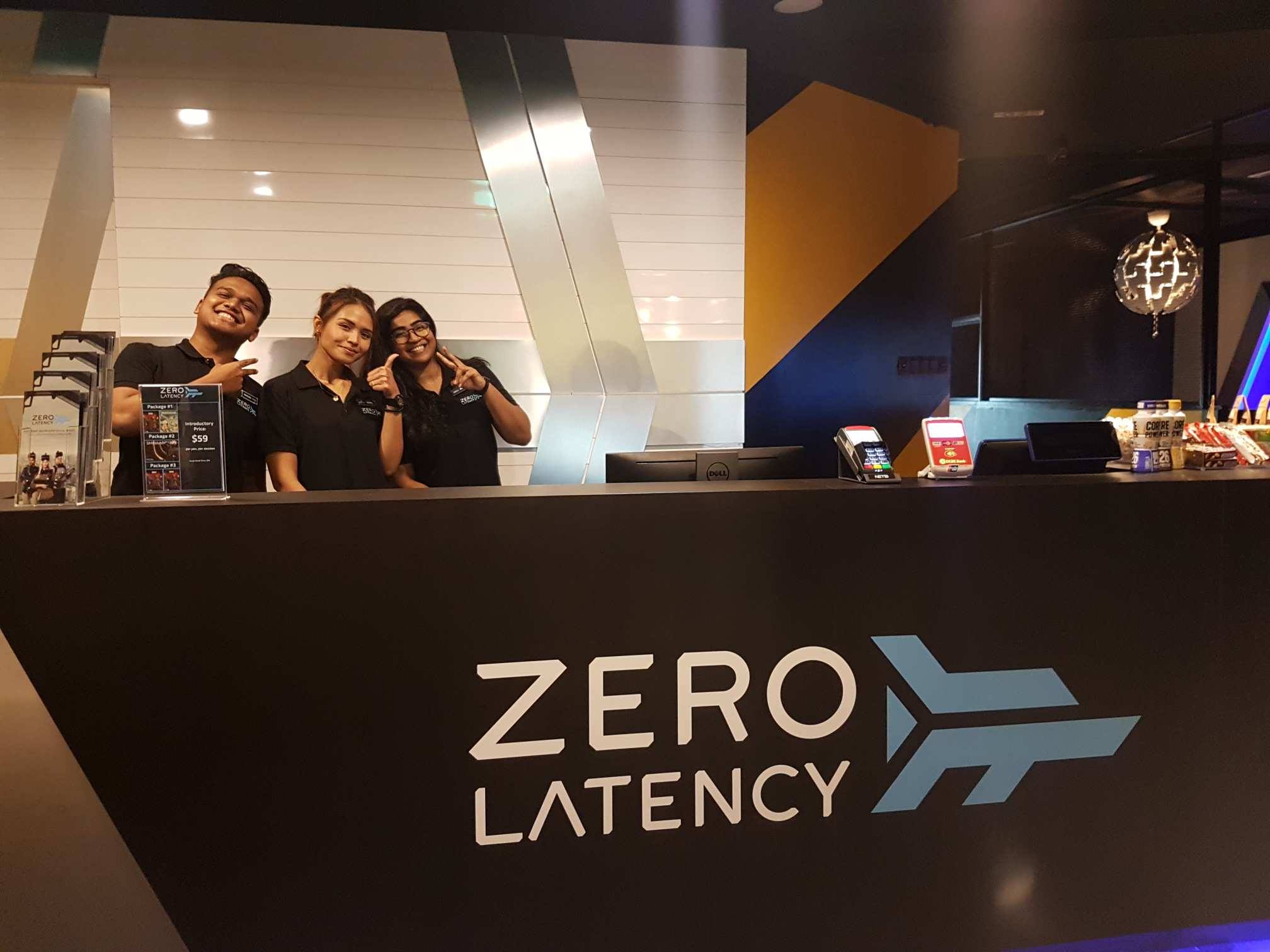 The friendly gamemasters who are critical to your game experience.

There are 2 special things about this LBE that is different from our VR arcade.

These solve some of the most common bugbears that we faced at our Arcade, which is that most games and experiences are single-player and the other people have to take turns to try it out.

The wires dangling around VR headsets like HTC Vive and Oculus Rift CV1 can be uncomfortable and a hazard. Zero Latency employs a cleverly designed backpack which contains the PC, wireless command module, and battery pack, and with the OSVR headset, and Razer headphones buckle-fastened on. 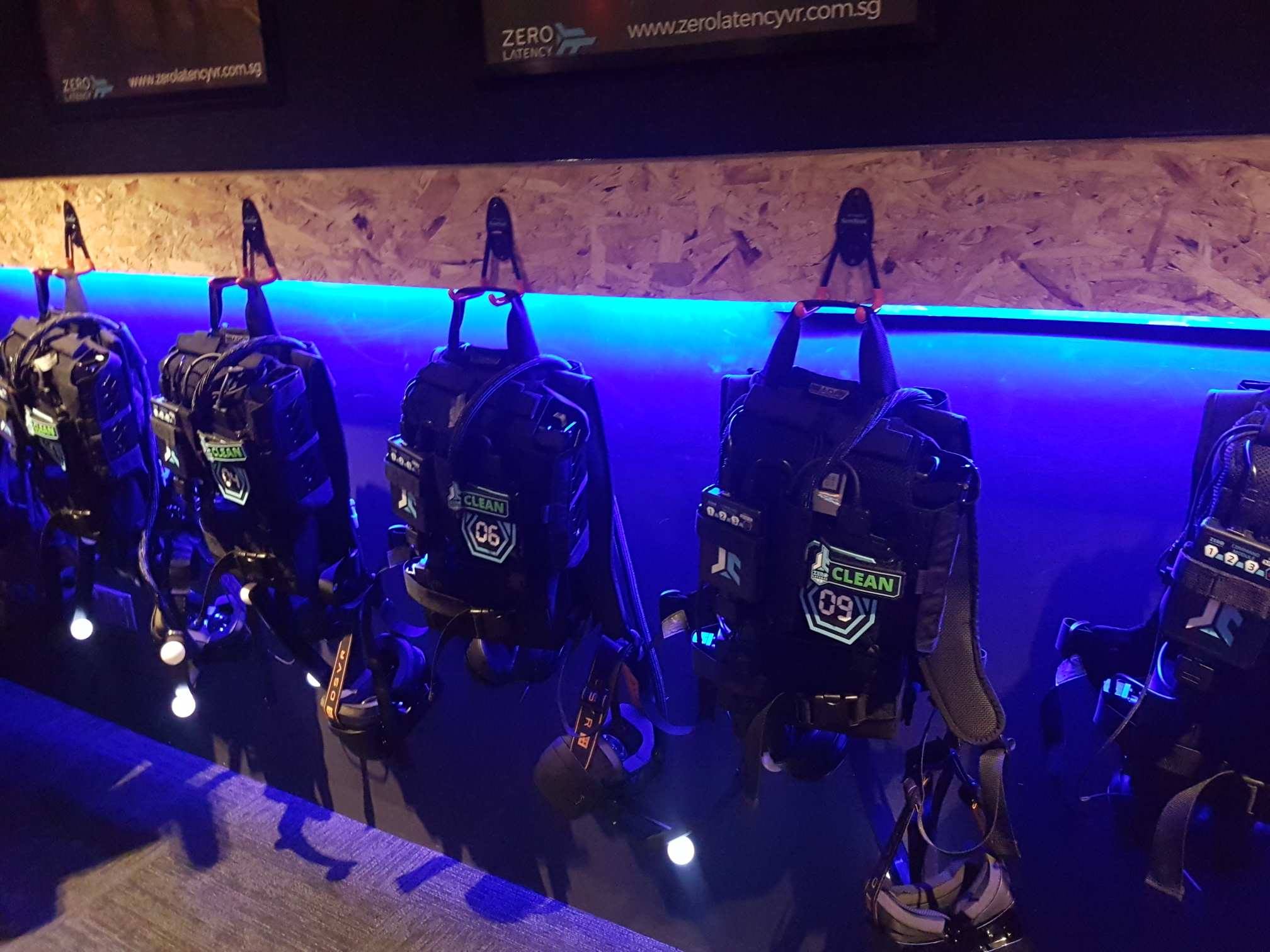 There are currently 3 game to choose from: Engineerium, Zombie Survival and Singularity.

Engineerium is a family-friendly 15 minute puzzle game and walking adventure set on a fantastical ancient alien world that lets you walk up and down ramps and twisty, curvy walls, defying gravity 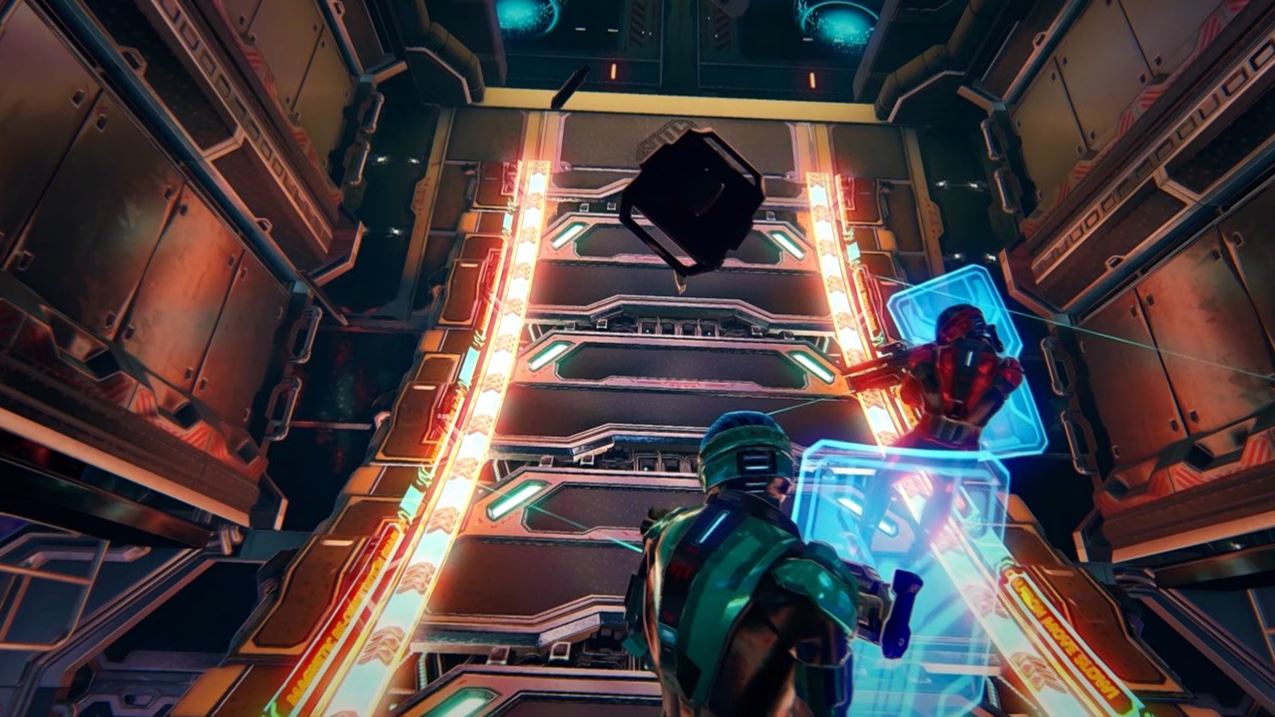 Singularity is an immersive space-themed 30 minute shooter in which players battle through robots, killer drones, and gun turrets in the zero-gravity environment of a military space station. 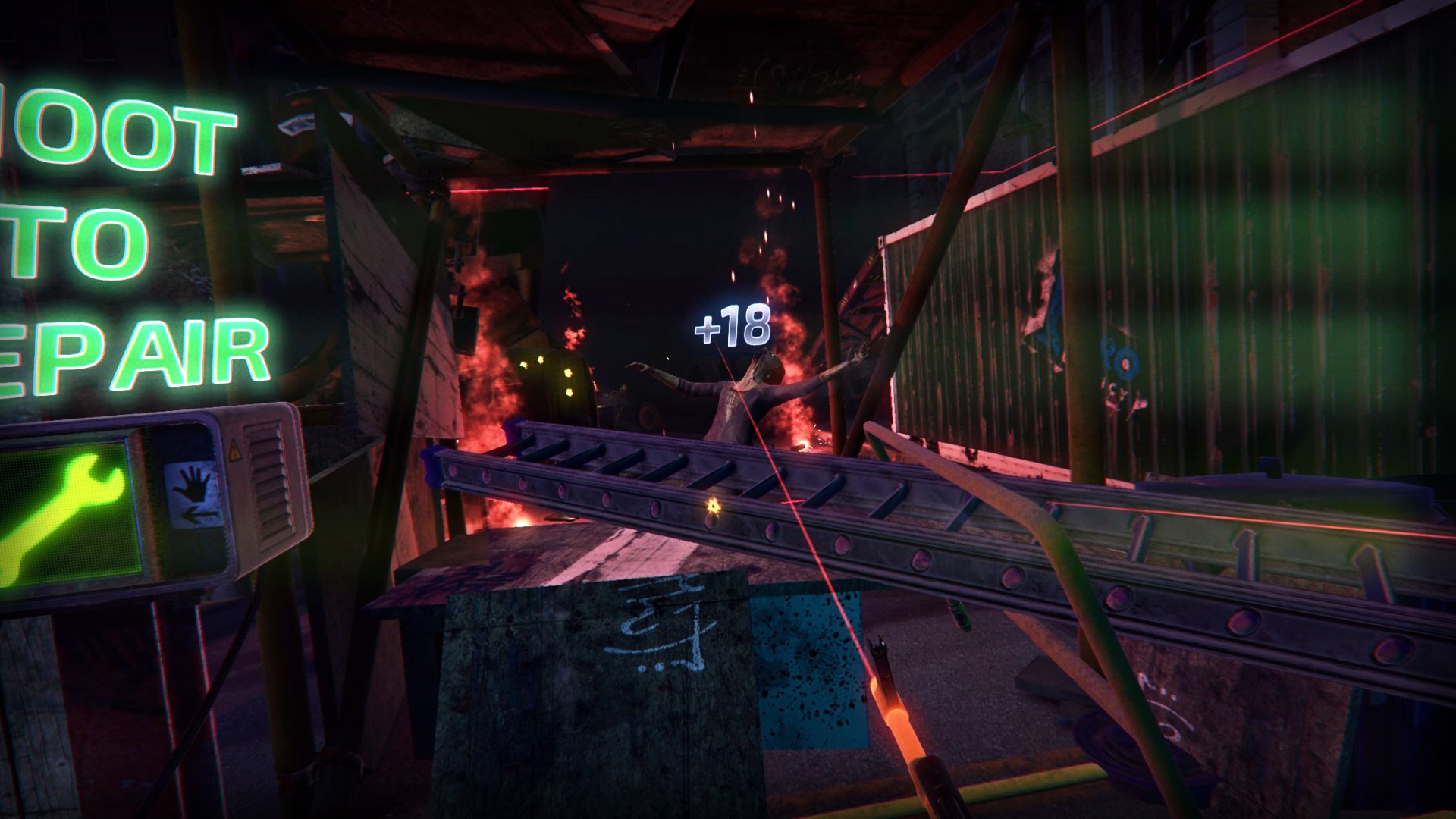 Zombie Survival is an intense, undead-themed 15 minute VR shooter, in which players are caught in a zombie outbreak and need to destroy the undead hordes while they wait for help to arrive.

We tried Engineerium and Zombie Survival which comes in a package of 45 minutes, 15 minutes for each experience as well as a briefing session.

Engineerium is a beginner-friendly experience. It allows the players to explore and take advantage of the large space available. Delving into the beautifully-designed world filled with flying whales and parrot rays, we got to defy physics, navigating across the platforms up, ramps and twisty ,curvy walls to solve puzzles. At some point of the game, you’d get to experience the mind boggling situation where your teammate is standing upside down on a platform above you. It is not a difficult game to play since you just have to walk from one point to another, without needing hand controllers. Even for seasoned VR players, the experience was effective in facilitating our orientation to the expanse of space.

Zombie Survival is the next experience that we played. It introduces a weighted gun controller which makes the experience more realistic (especially when using the shotgun) and immersive. It was an intense 15 minutes of shooting frenzy, with the 8 of us defending our base. You can choose to defend your side of the fort or venture higher up to the tower using an elevator. There is less required movement unlike Engineerium, which is a pity given that we had so much space to roam.

You can use different guns and there was a nice surprise at the end when you are being rescued that allows you to unleash damage on the waves of zombies. The gun is heavy like a real one but you hardly feel it during the game itself due to the adrenaline rush. After the game though, expect those who rarely work out to feel soreness in their arm.

This game is cooperative as well as competitive because you get scores depending on where you shoot (headshots get more points), what gun you use and how many zombies you kill. You get individual scores as well as team score so you can find out how you and your team stand among all the other players. Our team got a respectable 11 placing among the 238 teams who have played the game.

Our Game Master briefing us the use of the gun controller. 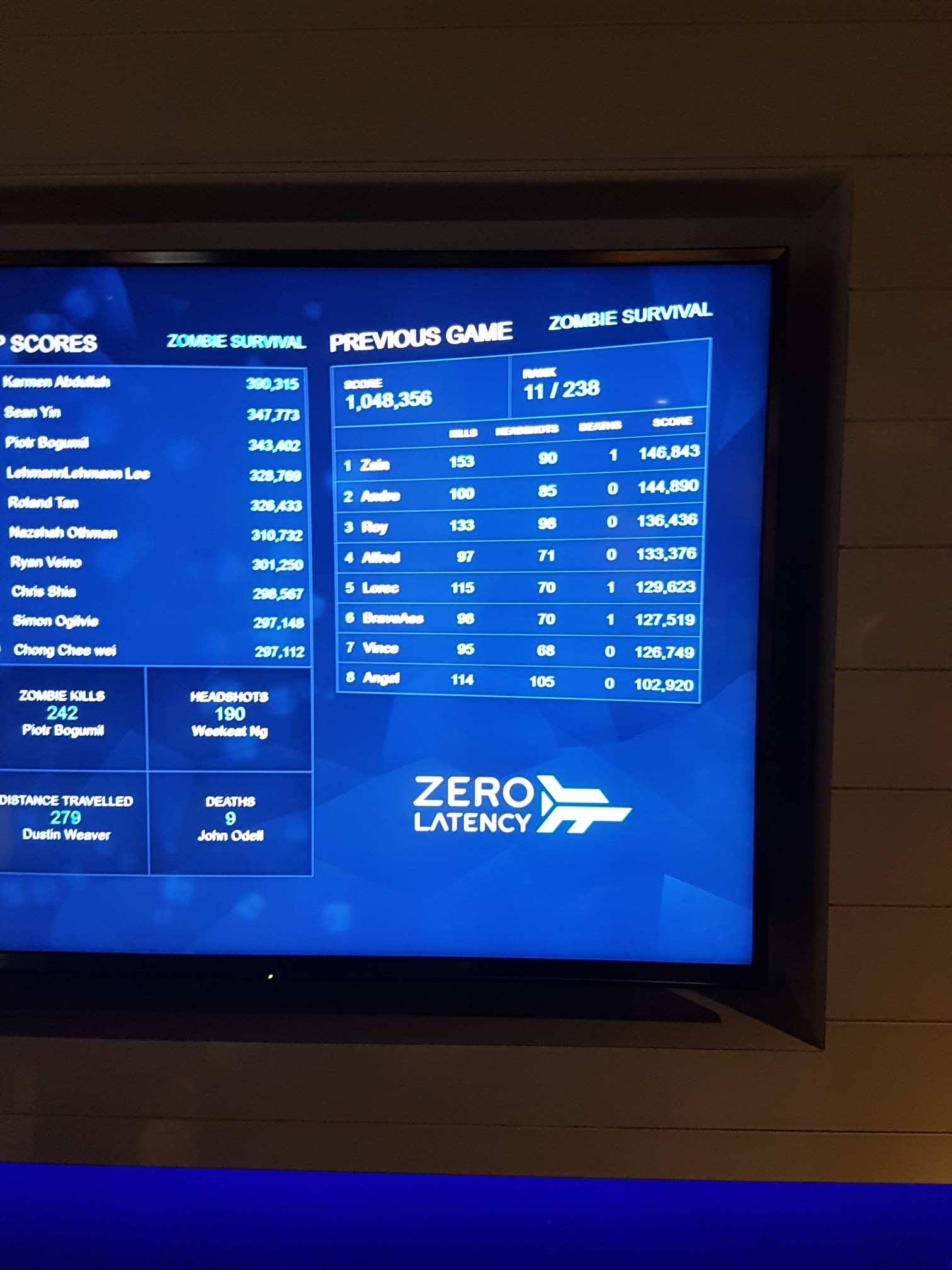 Our team scores ranks a respectable 11.

Singularity is a game that we did not get to play but from the description given to us, it sounds like an incredible experience which combines both the plus-points of movement in Engineerium and shooting in Zombie Survival.  We can’t wait to go back again to try it out.

What we wished could be better

VR headset seems to have a slight lag and lower framerate than what we are used to on the HTC Vive and Oculus but that is something that is still minimally acceptable. We understand that there are many challenges regarding free roam, multiplayer gameplay as we are developers and arcade operators too.

While the games were fun, we were expecting higher doses of adrenaline, especially for Zombie Survival. It was relatively predictable and manageable since we only had to camp in our safe fort and shoot away, which only required some aiming/shooting capabilities. It would be great if there were required to maneuver about, like with their original 45-minute Zombie Outbreak (exclusive to their main Melbourne outlet) and new 30-minute Outbreak Origins (Brisbane outlet) experiences. We hope that these would be available one day in Singapore too, since these were the titles which got us the most excited (and possibly nervous) after all.

Zero Latency is regarded as one of the world’s best virtual reality gaming experience and it is awesome to be able to have one here in Singapore to show us what the high-end LBE can offer in comparison to the VR arcade we were running. This is a great place that you can enjoy with your friends or with your work colleagues in a team cohesion event.

One factor that most people will find intimidating may be the price ($69 per session). Seize the opportunity while they are still having their opening promotion of $59 per session, and go try it out! 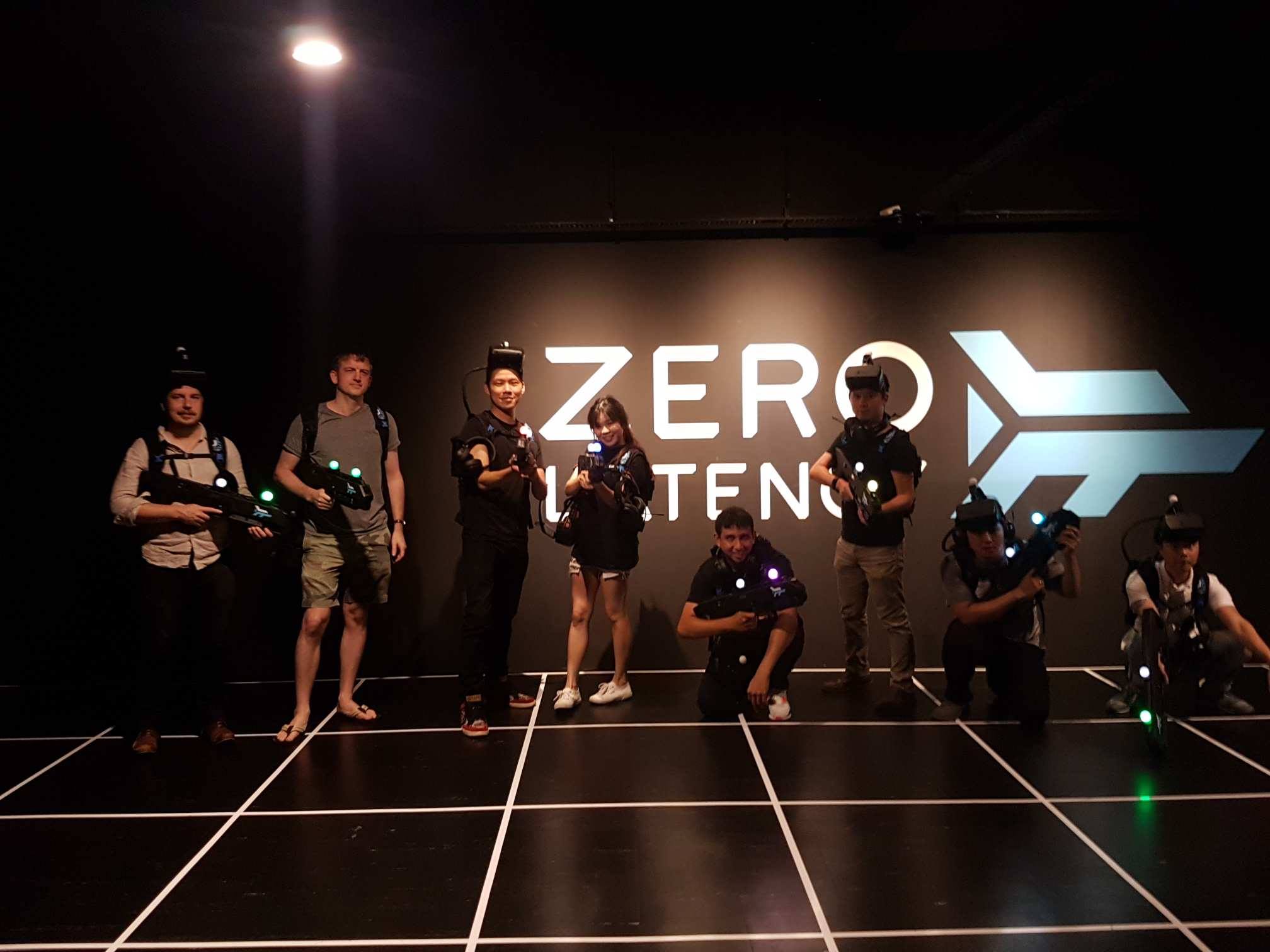 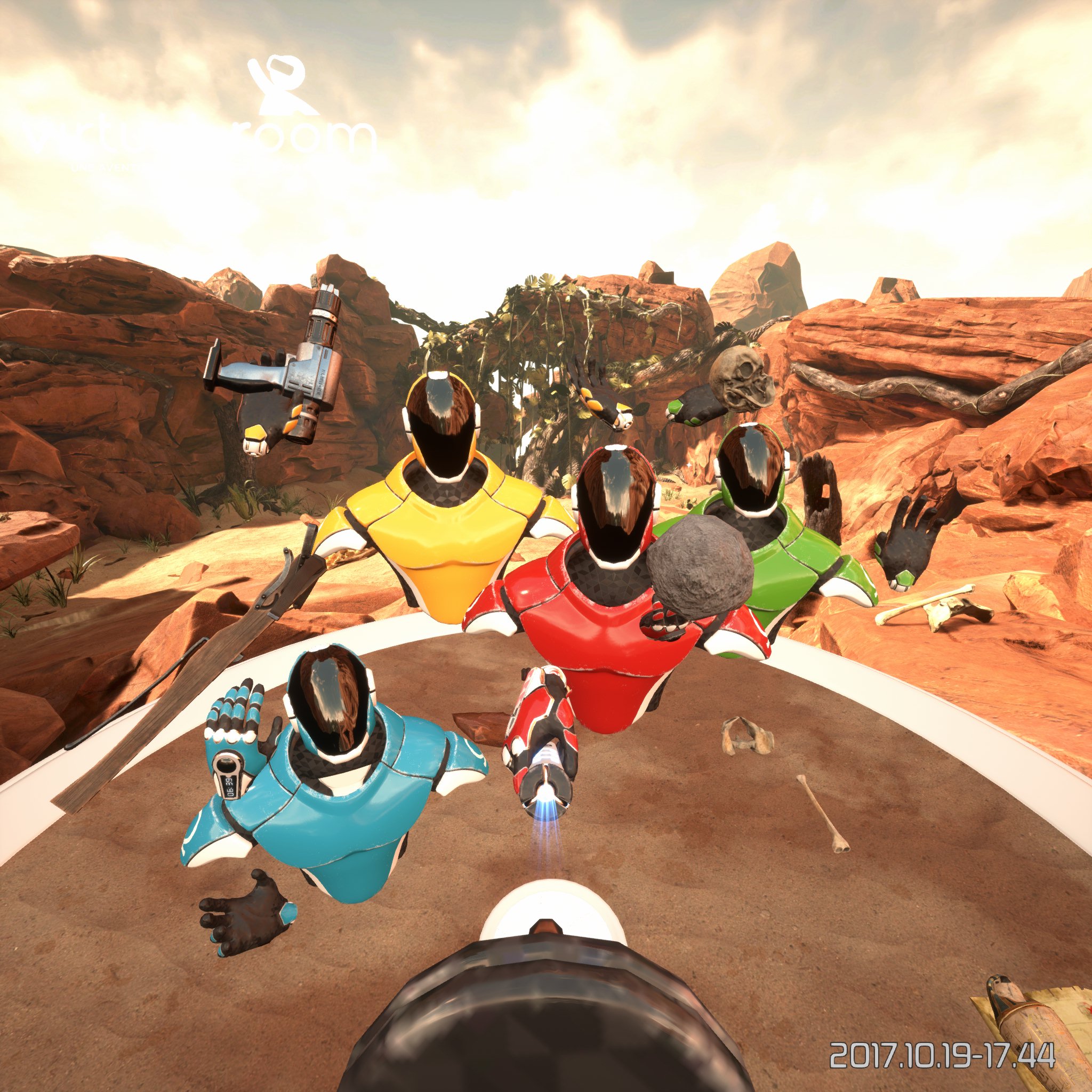